Dr. Robert Zieger, Distinguished Professor of History Emeritus at the University of Florida, passed away on March 6, 2013. Professor Zieger was one of the preeminent labor historians of the United States. He was a two-time recipient of the Philip Taft Labor History Book Award for the best book in labor history. He was a prolific writer and authored classic works including, For Jobs and Freedom: Race and Labor in America since 1865, The CIO, 1935-1955, and America’s Great War: World War I and the American Experience. Bob was a spirited and rigorous historian who introduced countless scholars, students, union members, and community organizers to the field of labor history. He edited several key volumes in southern labor history including Life and Labor in the New New South (2012) which presented some of the best new work in the field of southern labor studies.

Bob Zieger began teaching on the college level at the University of Wisconsin-Stevens Point in 1964, and he moved to Kansas State University in 1973. Subsequently, he served as a professor of history at Wayne State University, and his labor history courses were immensely popular with union members in Detroit. Dr. Zieger moved to the University of Florida in 1986, and in 1998 he received the appointment of Distinguished Professor of History. Bob was a beloved teacher at the UF and his favorite courses were the History of American Labor and The United States, 1914-1945. Scores of Bob’s students went on to become union organizers and leaders in the labor movement. 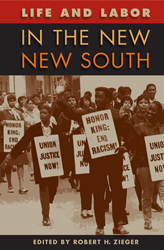 Dr. Bob Zieger talked the talk, and he walked the walk. Bob was a longtime member and leader of the United Faculty of Florida, AFL-CIO. He was his union’s delegate to the North Central Florida Central Labor Council for many years, and he gave the keynote address at the CLC’s Annual Dinner in 2012. On the job, Dr. Zieger conducted scores of office visits beginning in the 1990s to encourage fellow faculty and instructors to join the United Faculty of Florida. His energy and knowledge of the labor history was an important element in a highly successful union drive on campus recently. 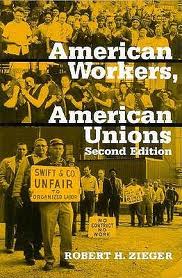 Bob Zieger was born in 1938 in Englewood, New Jersey into a union family. He is survived by his wife, Gay Pitman, a retired college instructor, his son Robert, and his granddaughter Persephone. He enjoyed taking long walks, playing with Persephone, and promoting Gay’s 2nd career as an artist. Bob Zieger will be sorely missed by his colleagues in the history profession, his comrades in the labor movement and by the countless students that he mentored over an exceptional career of teaching, research, and service. Bob Zieger, Presente!