On August 6, 2015, the UFF-UF bargaining team declared negotiations over  Article 24, Salaries to be at an impasse.

On November 18, a hearing over the impasse was held before Special Magistrate Tom Young.View UFF-UF’s presentation of the issues at impasse here: UFF-UF impasse presentation (pdf). In his recommended settlement (SM Recommendation, 12/28/15) Young ruled with the UF administration that only our salaries were open for consideration, thereby eliminating a huber of salary-related concerns that UFF raised, including low promotion raises and the absence of merit criteria and committees. In regard to faculty salaries, Young made three key points:

While UFF accepted Young’s recommendation, the administration rejected it. The case then moved to the University’s Board of Trustees, whose decision was binding.  The following documents were entered into the record of the hearing before the Board of Trustees, help Jan. 25, 2016: UFF impasse recommendation for BOT; University Administration Impasse Recommendation 1-25-2016. The BOT found in favor of the university administration.  As a result, the following amendment was made to Article 24, Salaries: Amendments to Article 24 1-25-16

Bargaining Update, August 6, 2015: UF does not move from pervious position; UFF-UF declares negotiations to be at an impasse.

These charts reflect faculty raises from 2011-2014.  All of these raises were in merit, except for 2013, when the merit pool was 3.85%, and the state allocated $1000/$1400 across-the-board increases (total figured as 4%). Increases compounded to show cumulative effects.

Upper Administration Salary Percent Change: 20 administrators from all colleges and schools across the university, ranked Associate Dean to Provost, were selected based on their having remained in their position at UF during the period 2010-2014. The selection is comprised of 11 Associate Deans, 4 Deans, 1 Dean and ASO VP, 2 ASO Provost, 1 Sr. VP, and 1 Provost and Sr. VP. Units represented are: Arts (2), Business (3), CLAS (2), COE (1), DCP (2), Engineering (2), Grad School (1), Health Affairs (1), HHP (1), Medicine (2), Provost (3). Their salaries were identified using public records available through the UF Office of Institutional Planning and Research. If they received salary under multiple appointments, those salaries were added together to account for 1.0 FTE salary. The percent change in salary per year was calculated, as well as the percent change from 2010-2014. These figures include the state-allocated $1000/$1400 across the board increases. Increases compounded to show cumulative effects. (Click on charts for expanded view.) 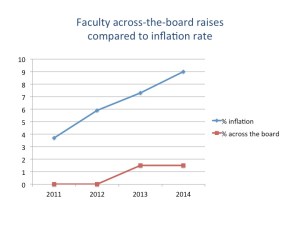 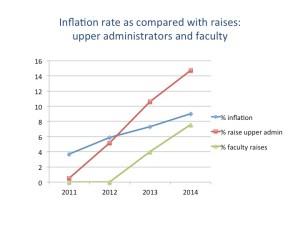 The first three charts below compare UF salaries to peer institutions, as designated by UF Office of Institutional Planning and Research. All salary information is from  the 2013-14 AAUP Faculty Salary Survey, as reported in Chronicle of Higher Education, April 7, 2014.  Non-tenure track ranks are not included because UF did not provide salary data on NTT salaries to the AAUP survey. Click here for more salary information. (click on charts for expanded view.) 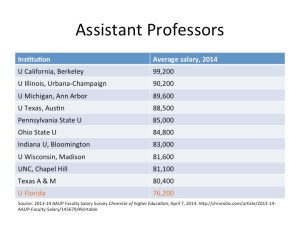 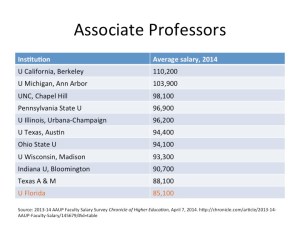 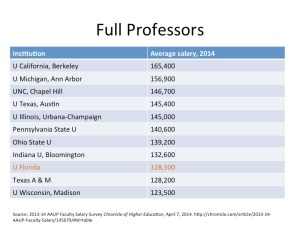 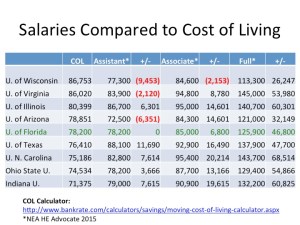 UF raises upon promotion compared to other Florida state universities: 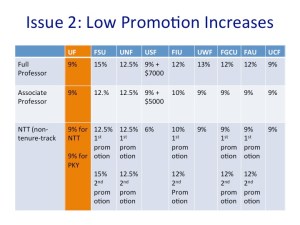 UF claimed that our raise proposal was unaffordable. Here are some facts about UF’s financial picture: 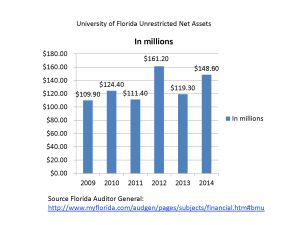 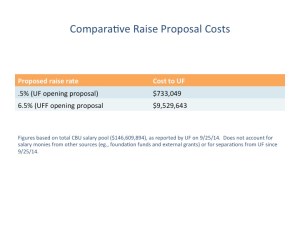